Memo on the prevention of child injuries

Since the beginning of the winter season, people have already been injured on the ski slopes, some are undergoing hospital treatment, others are recovering from injuries in the polyclinic. Most of the victims rode on tubes or "vatrushka". 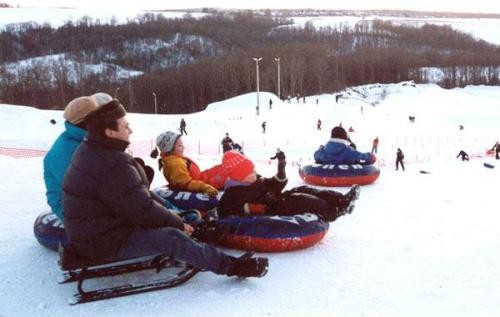 Tubing – riding on an inflatable sled (tubes) on snow or on water.

Sled (tube) – an inflatable round tube in a cover with a reinforced bottom and handles. The tube cover is made of strong material, and the areas under maximum load are additionally reinforced with nylon tape. The special coating minimizes friction with the surface when sliding, which allows you to reach high speed on slopes with a small incline”.

“Riding on “vatrushka” is the most dangerous and unpredictable type of recreation”, medical experts say.

Unlike a sled, it can reach high speed and even spin around its axis during getting down. Moreover, it is completely uncontrollable and not equipped with a stopping device.

Riding on “vatrushka” is allowed only on specially prepared tracks, but often vacationers neglect this rule. Soft round sled seemc absolutely harmless, and in pursuit of sensations, many remove the restrictive grid and rise higher, as a result, the stopping distance increases. Flying at high speed, without the ability to stop, an adult is like a car with no brakes, he will either hit someone or crash himself.

Also, you cannot attach the tubes to each other as a "train", they can turn over. It is dangerous to sit on an inflatable sled together, you can get kicked out of it. However, adults often take their children with them, which leads to child injuries.

To make your vacation enjoyable and tubing safe, it is necessary to adhere to only a few simple rules: ride only in a strictly designated place, and before getting down the hill, check that there are no people on the way.

During the ride, it is recommended to hold onto the special belts located on the sides of the sled.

When riding, it is prohibited: